Thanks to the song ‘Put the lime in the coconut’ by Harry Nilsson, you could be forgiven for thinking that this flavour combination is a huge no no. But it is sublime! I found this coconut and lime bundt cake recipe over on the lovely MapleSpice blog by Debbie Walsh. Debbie in turn took this from a BBC recipe. It’s the first time I have made it so I’ll be looking to play about with it and make it my own eventually. But I usually start with an existing recipe. The recipe calls for a blend of coconut cream and coconut milk, I used just coconut milk as I couldn’t get hold of the cream. Also, use golden caster sugar if you can, I only had white which is not as good (but will do in a pinch). So, here it is. 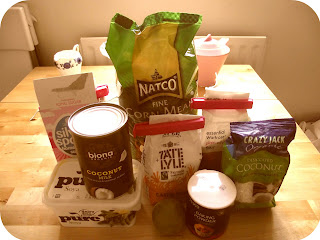 You will need: For the sponge.

50ml coconut cream, heated just until liquid (use 150ml of coconut milk if you can’t get cream)

about 4 Tbsp full fat coconut milk (add one at a time, I found that 3 Tbsp made it a bit too runny, and that’s with me adding in 30g of extra icing sugar too!).

‘Butter’ and flour the bundt tin and put aside for now.

Ok, so here’s what you need to do…

1) In a medium bowl, sieve in the flour, then add the corn meal, dessicated coconut, salt and baking powder and mix together gently.*

2) Cream together the spread and caster sugar until it is nice and fluffy, like so. 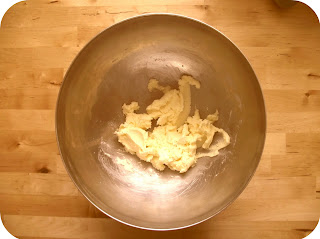 3) Add in the lime juice, lime zest and the coconut cream and whisk well. Add in the coconut milk** and mix until fully incorporated (sounds so business-like, lol). You end up with a rather gross, curdled looking mix, but don’t panic! 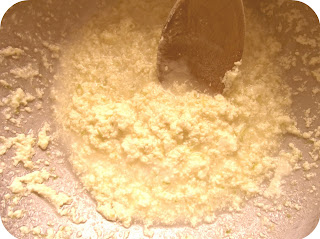 4) Add the dry ingredients to the wet and fold together with a wooden spoon until just combined. Don’t over mix.

5) Spoon the mixture into your prepared cake tin and level it out with a spatula. A spatula is essential for getting as much of the cake mix out of the bowl too (unless you want to lick the bowl clean of course! Yum!). 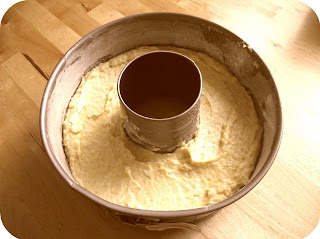 6) Bake in the oven for 30-35 minutes. The top should be firm, lightly golden and a toothpick should come out clean (the original BBC recipe calls for a 1 hour cooking time, but Debbie says to cut this time down and I agree. Unless you want cake with the consistency of a brick).

7) Remove from the oven and leave for about 5 minutes to cool a little. Turn out onto a wire rack (this bit was tricky for me as the cake didn’t rise much, so the sides were deep on each side still and it nearly broke). Leave to cool completely. Turn cake over so the flat side is the bottom and the bumpy side is the top :) 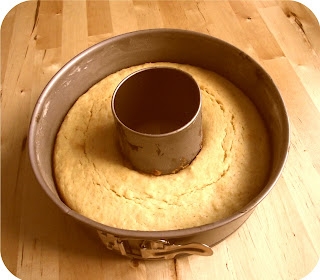 8) For the icing, mix together the sugar and lime juice and zest. Then add a tablespoonful of coconut milk at a time. Spread this over the cake and allow some to drip down the sides. To be honest I didn’t have much choice in this as the icing was pretty runny. Next time I would add slightly less lime juice and then put the icing in the fridge to stiffen slightly. 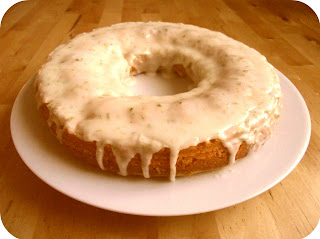 And so there you have it. The resulting cake was actually more moist than I thought it would be. Very slightly crumbly and extremely yummy. It tasted even better the next day too. I guess it would last at least 3 days in an air-tight container in the fridge. I wouldn’t know though as it was all gone in little over a day! 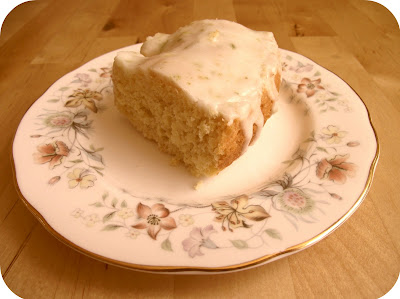 * I put this instruction first rather than third as I think the sooner you add it to the wet ingredients the better.

** The recipe states that you add in the coconut milk a bit at a time but I didn’t really see what the benefit was. The mix started to curdle straight away, even though I added in a small amount of the coconut milk at the beginning.